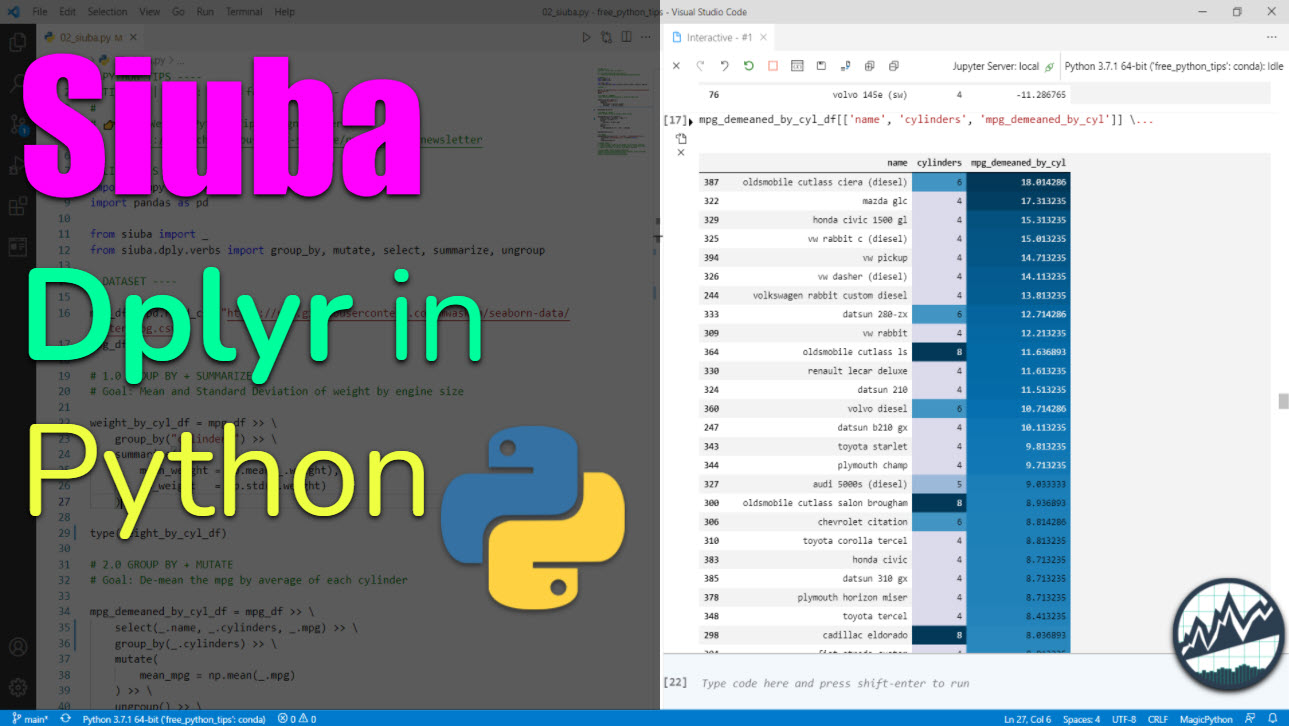 This article is part of Python-Tips Weekly, a bi-weekly video tutorial that shows you step-by-step how to do common Python coding tasks.

Here are the links to get set up. 👇

Learn how to use Siuba in our free 10-minute YouTube video.

The siuba python library brings the power of R’s dplyr and the tidyverse to Python. Gain access to functions like:

Before we get started, get the Python Cheat Sheet

Siuba is great for data wrangling in Python if you are coming from an R background. But, you might want to explore documentation for the entire Python Ecosystem. I’ll use the Ultimate Python Cheat Sheet.

First, Download the Ultimate Python Cheat Sheet. This gives you access to the entire Python Ecosystem at your fingertips via hyperlinked documenation and cheat sheets. 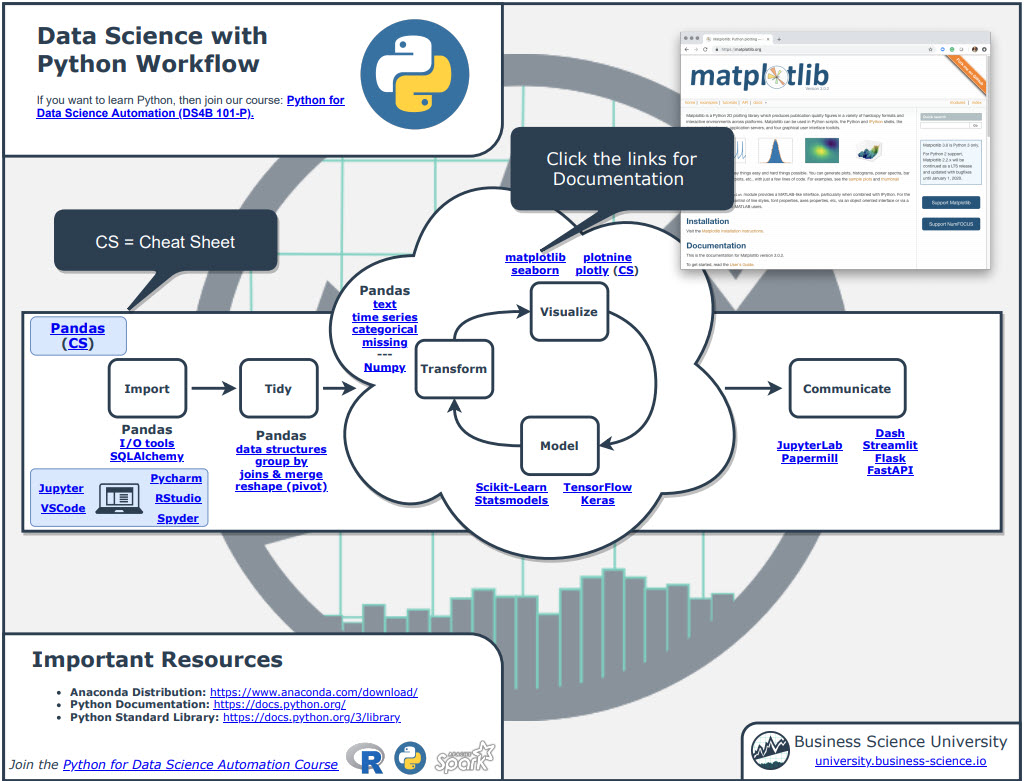 Navigate to “Coming From R?” Section

Next, go to the section, “Coming from R?”. You can quickly get to the Siuba Documentation. 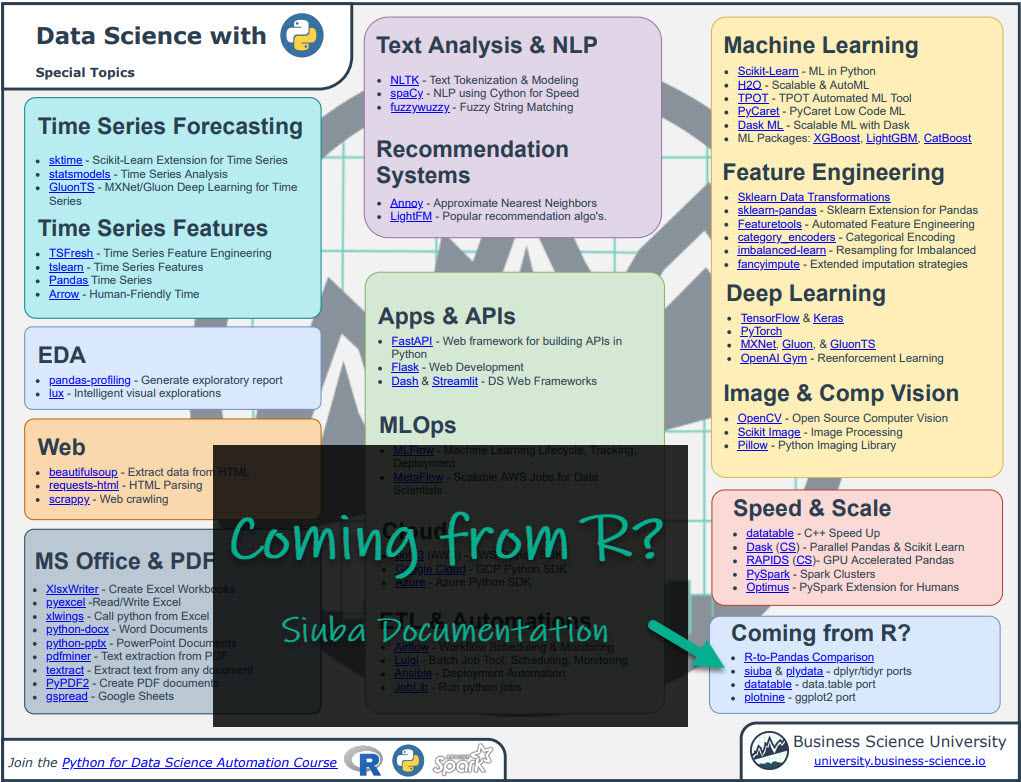 You have access to the Siuba Documentation at your fingertips. 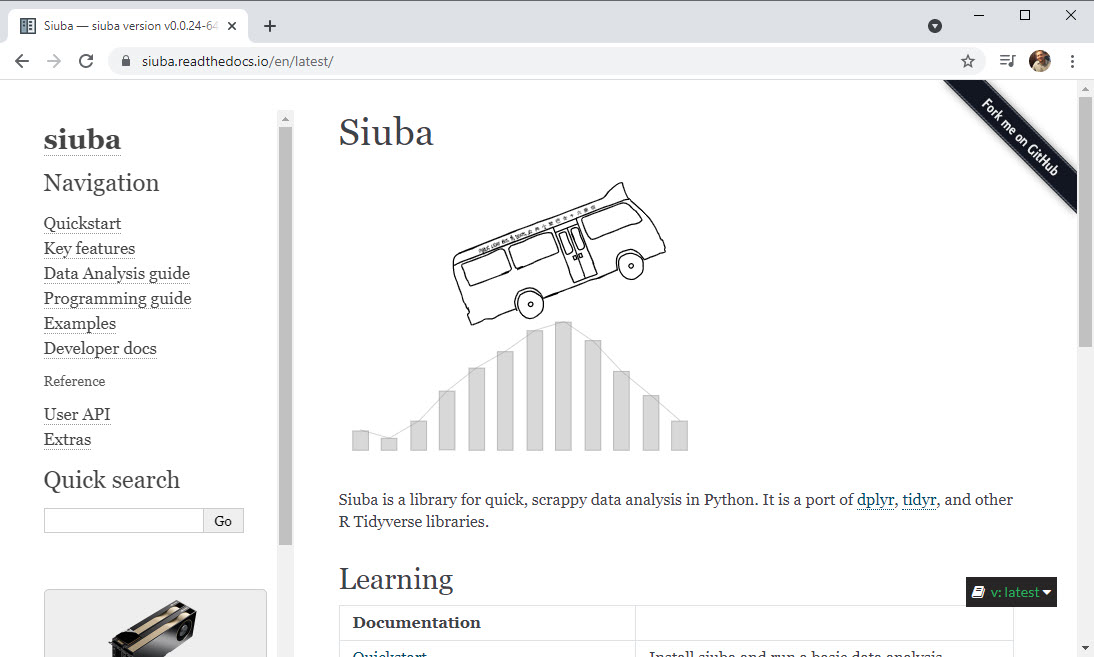 From the Siuba Documentation, you can see that there are “verbs”, “siu expressions”, and the pipe (>>). We’ll test these out in our tutorial.

Taking Siuba for a Test Spin

Step 2: Group By and Summarize

Goal: Mean and Standard Deviation of weight by engine size

We’ll perform a basic operation: group_by() and summarize() to get the mean and standard deviation of vehicle weight by engine size.

Let’s explain each operation in detail so you understand what’s going on.

This returns the vehicle weight summarized by the engine size (number of cylinders). 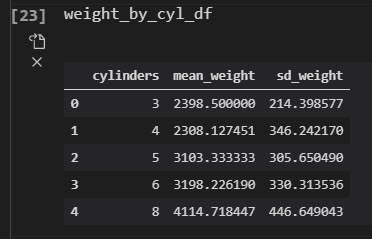 Goal: De-mean the mpg by average of each cylinder

We’ll go through a more complex example using a group_by() and mutate(). See if you can figure out what’s going on here. Tip - Try reading it like a paragraph in a text. 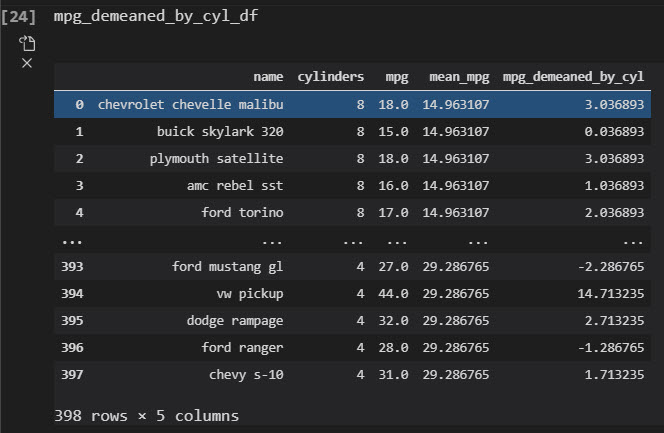 Step 4: From Siuba To Pandas

Siuba is great. It returns a DataFrame, which means we can use Pandas. One thing you might want to do is format the background in the table to highlight if vehicle model’s fuel efficiency is above or below the average by engine size. We can do this with Pandas Table Styles. 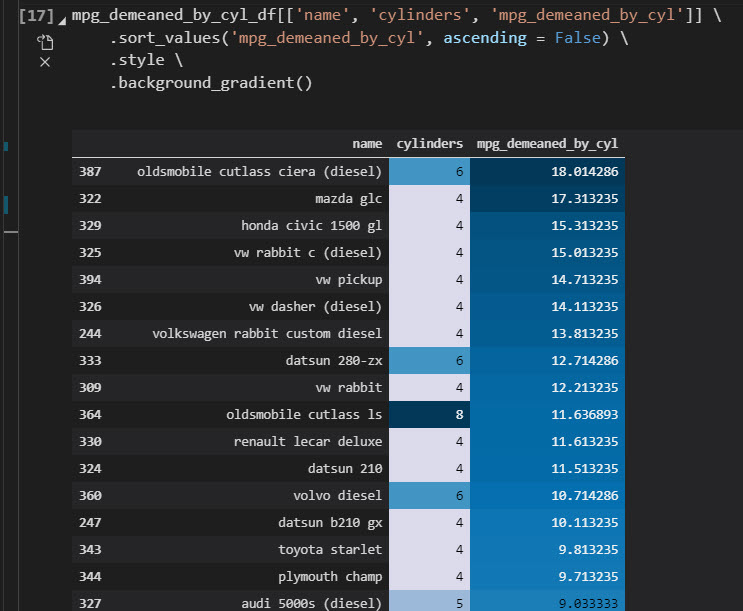 This was a short introduction to siuba, which brings dplyr to python. If you’re coming from R, siuba is a great package to warm yourself up to Python.

With that said, you’re eventually going to want to learn pandas, the most widely used data wrangling tool in Python. Why?

So, it makes sense to eventually learn Pandas to help with communication and working on R/Python teams.

If you’d like to learn data science for business with Python and Pandas from an R-programmers guidance, then read on. 👇

My Journey Learning R and Python

Everyone knows me as the R guy. With the launch of my new Python course, I’m reflecting on my journey.

I started learning R in 2013 after Excel let me down (many many times with the dreaded blue screen of death). I had it. My data was too big, and I needed new tools that I could count on.

I turned to R for it’s statistical and reporting capabilities. The combination of dplyr and ggplot2 were like thunder & lightning. Add on Rmarkdown for reporting, and game over. Then I found out about shiny, and I was in heaven.

It’s been an amazing learning experience, but now I recognize it was one dimensional.

Over the past 12 months I’ve been learning Python. I started by building my first R/Python Integration: Modeltime GluonTS, which ports into R the AWS GluonTS library written in Python.

This was my first realization that R and Python can work in harmony. Seeing the deep learning forecasts from GluonTS being shared in R was beautiful.

So I decided 12-months ago it was time to begin teaching Python. And I began working on a course plan.

It’s my belief that Data Science Teams are changing. They now need to:

This is why I built Python for Data Science Automation.

So learners like me can begin learning Python in a project-focused way that shows the beauty of the language for data science + software engineering. It’s a beginner course too.

How I can help

If you are interested in learning Python and the ecosystem of tools at a deeper level, then I have a streamlined program that will get you past your struggles and improve your career in the process.

The result is that you break through previous struggles, learning from my experience & our community of 2000+ data scientists that are ready to help you succeed. You’ll learn a ton going through our Business Process Automation project.

Best of All: I am an R-Programmer that has Learned Python

My background is R-programming. Yet, I’ve found that learning to use both R and Python is absolutely the future of data science.

Ready to take the next step?

Then let’s get started.