ggdist: Make a Raincloud Plot to Visualize Distribution in ggplot2 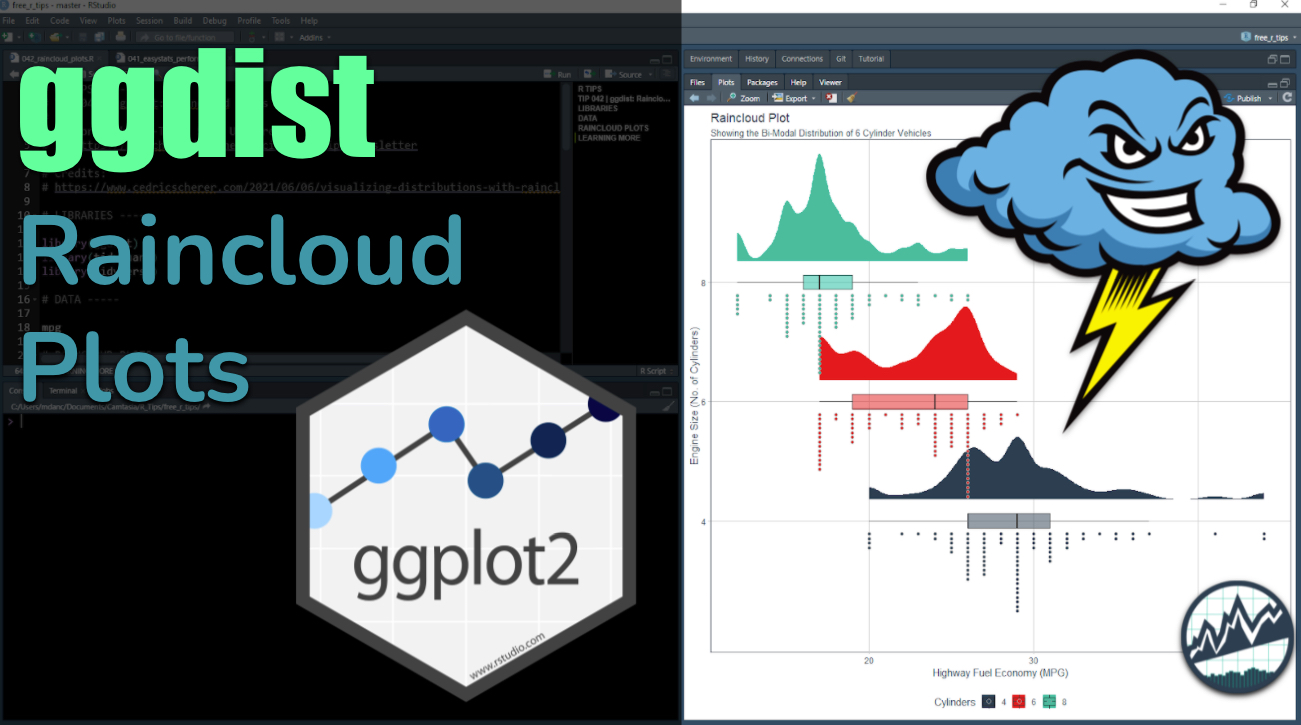 One of the most important things a data scientist can do that will uncover business insights is to Visualize distributions.

And, this is something I had a hard time with. But I recently found an easy solution.

This article is part of R-Tips Weekly, a weekly video tutorial that shows you step-by-step how to do common R coding tasks.

Here are the links to get set up. 👇

This Tutorial Is Available In Video

I have a companion video tutorial that shows even more secrets (plus mistakes to avoid). And, I’m finding that a lot of my students prefer the dialogue that goes along with coding. So check out this video to see me running the code in this tutorial. 👇

What is a Raincloud Plot?

The Raincloud Plot is a visualization that produces a half-density to a distribution plot. It gets the name because the density plot is in the shape of a “raincloud”. The raincloud plot enhances the traditional box plot by highlighting multiple modalities (an indicator that groups may exist). The boxplot does not show where densities are clustered, but the raincloud plot does! 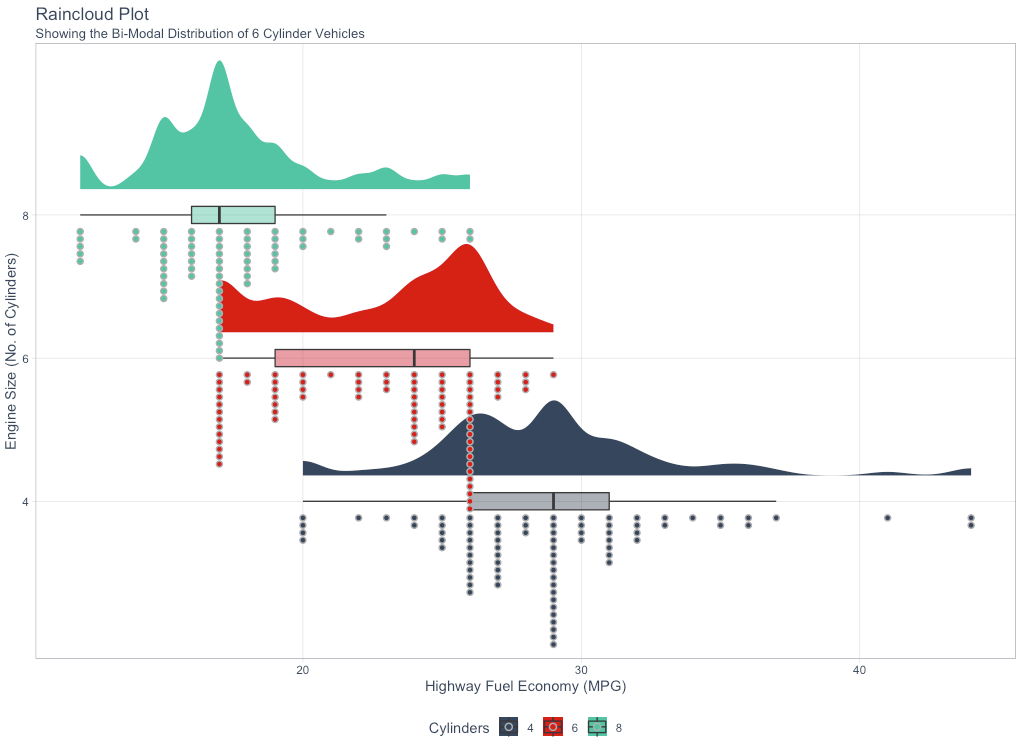 We’ll go through a short tutorial to get you up and running with ggdist to make a raincloud plot.

This tutorial showcases the awesome power of ggdist for visualizing distributions.

This tutorial wouldn’t be possible without another tutorial, Visualizing Distributions with Raincloud Plots by Cédric Scherer. Cédric truly a ggplot2 master. Follow Cédric Scherer on Twitter to learn more about his excellent visualization work.

Ever forget which R package to use?

Ever forget which R package to use? Or which tidyverse function to apply? Me too.

That’s why I made my ultimate R cheat sheet. Here’s how to use it for ggplot2 visualizations and plotting. 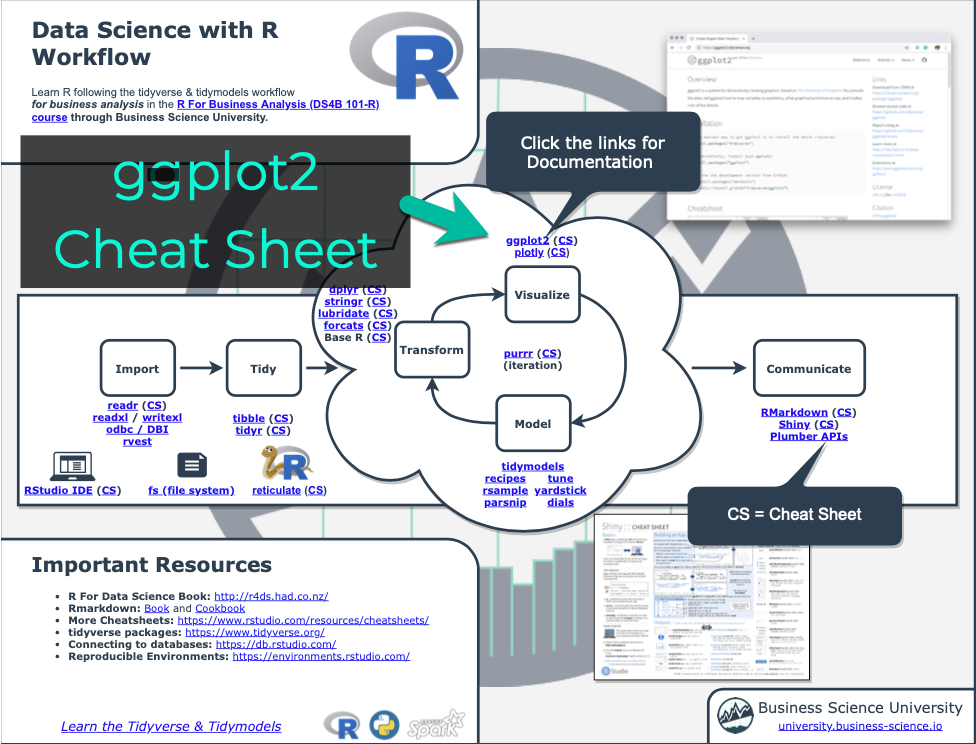 Step 3: Reference the ggplot2 cheat sheet. This shows you the core plotting functions available in the ggplot library. Now you can use these any time you need to make a visualization with ggplot2. 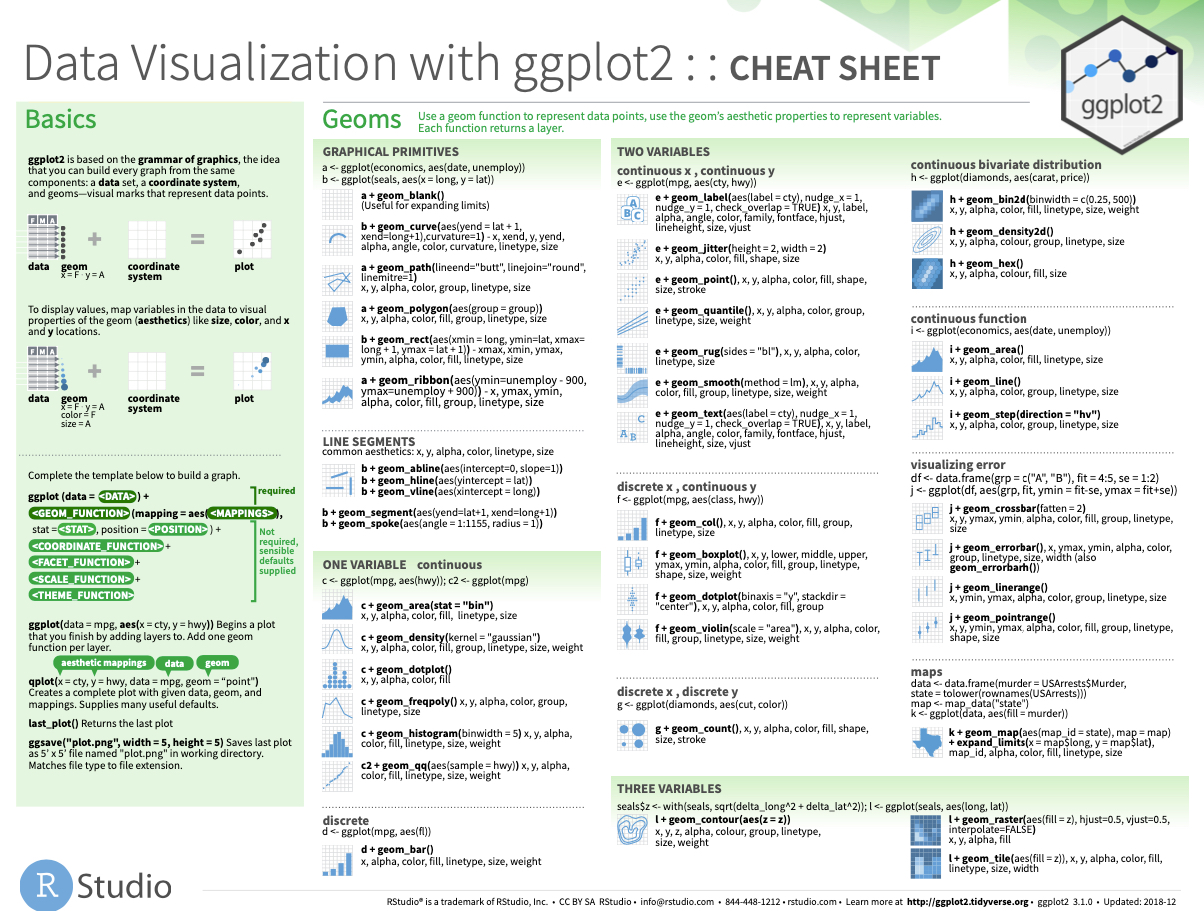 Load the Libraries and Data

First, run this code to:

Next, we’ll make a Raincloud plot that highlights the distribution of Vehicle Fuel Economy (MPG) by Engine Size (Number of Cylinders). We’ll combine ggplot2 and ggdist through 5 plotting tips that even beginners can implement.

The first step is to make the ggplot2 canvas. We:

This produces a blank plot, which is the first layer. You can see that the x-axis is labeled “factor(cyl)” and the y-axis is “hwy” indicating the data has been mapped to the visualization. 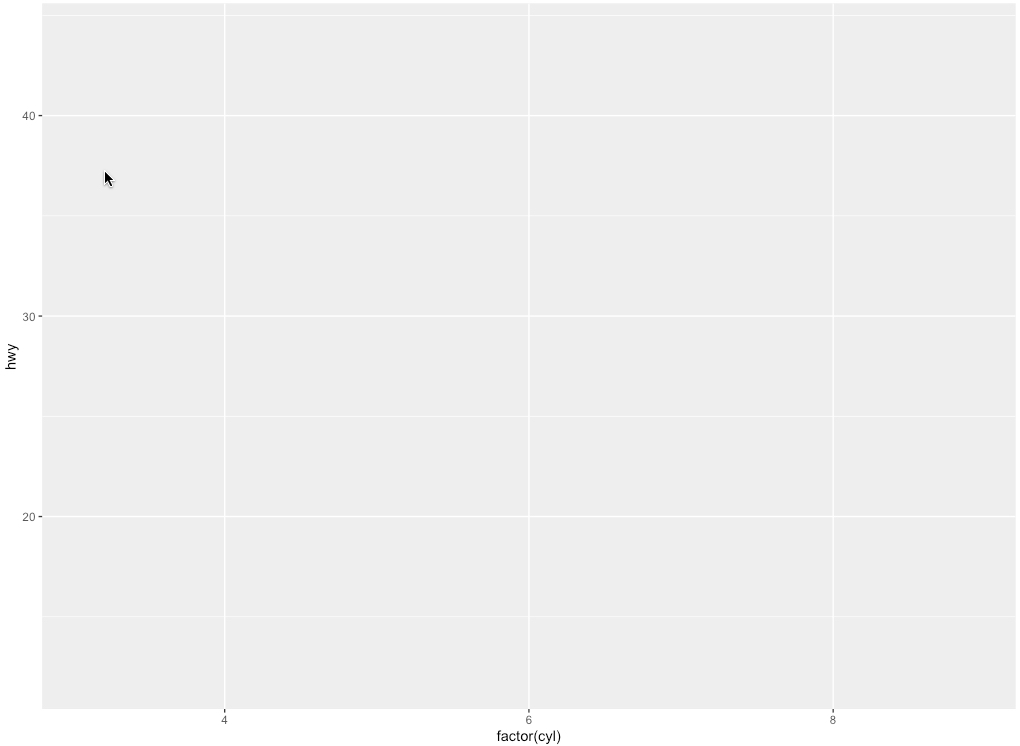 Tip 2: Add the Rainclouds with stat_halfeye())

Next, we add our first geometry layer using ggdist::stat_halfeye(). This produces a Half Eye visualization, which is contains a half-density and a slab-interval. We remove the slab interval by setting .width = 0 and point_colour = NA. The half-density remains.

And here’s the output. We can see the half-denisty distributions for fuel economy (hwy) by engine size (cyl). 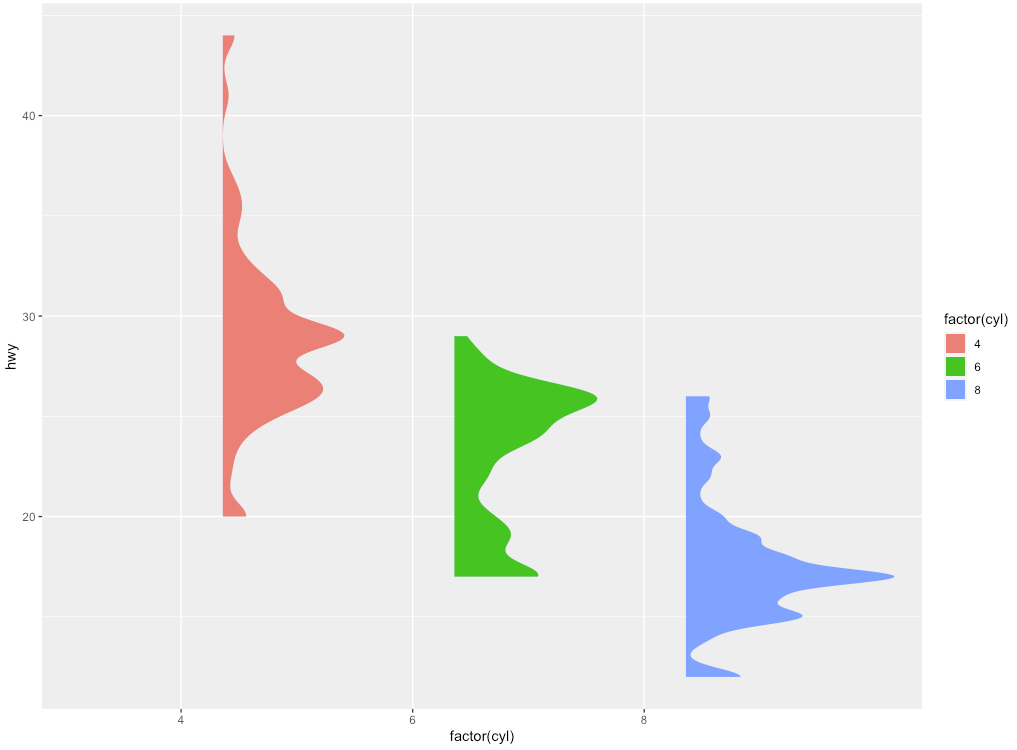 Tip 3: Add the Boxplot with geom_boxplot()

Next, add the second geometry layer using ggplot2::geom_boxplot(). This produces a narrow boxplot. We reduce the width and adjust the opacity. 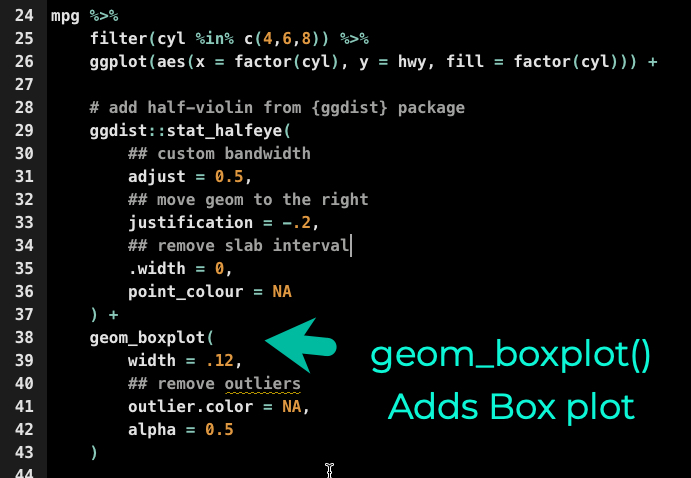 And here’s the output. We now have a boxplot and half-density. We can see how the distributions vary compared to the median and inner-quartile range. 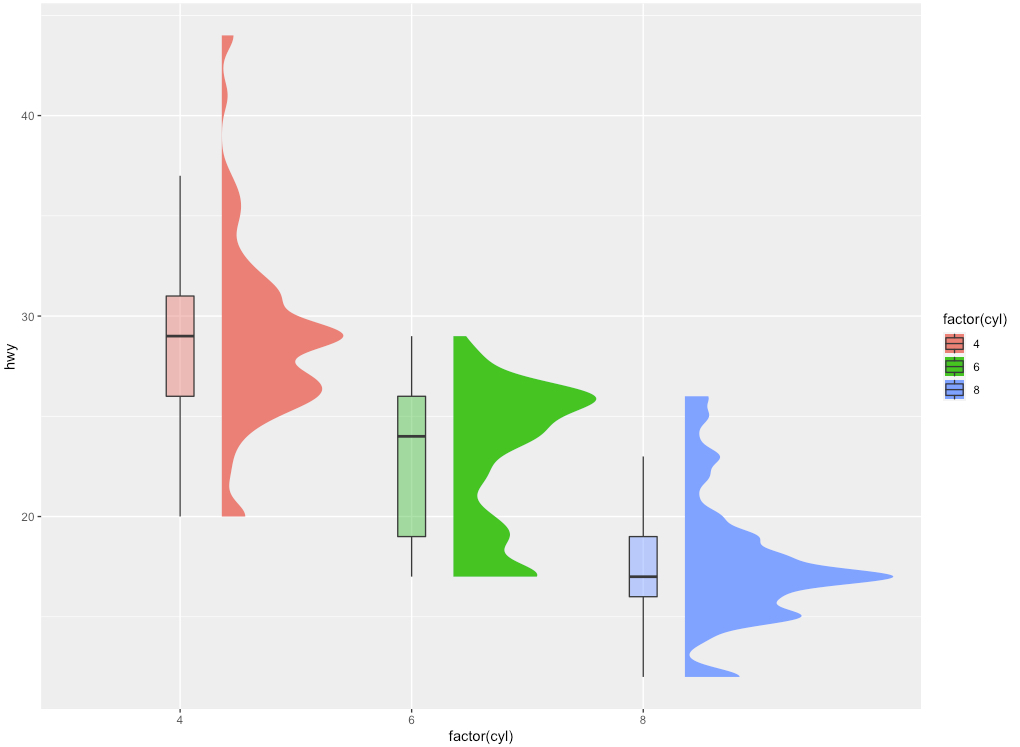 Next, add the third geometry layer using ggdist::stat_dots(). This produces a half-dotplot, which is similar to a histogram that indicates the number of samples (number of dots) in each bin. We select side = "left" to indicate we want it on the left-hand side. 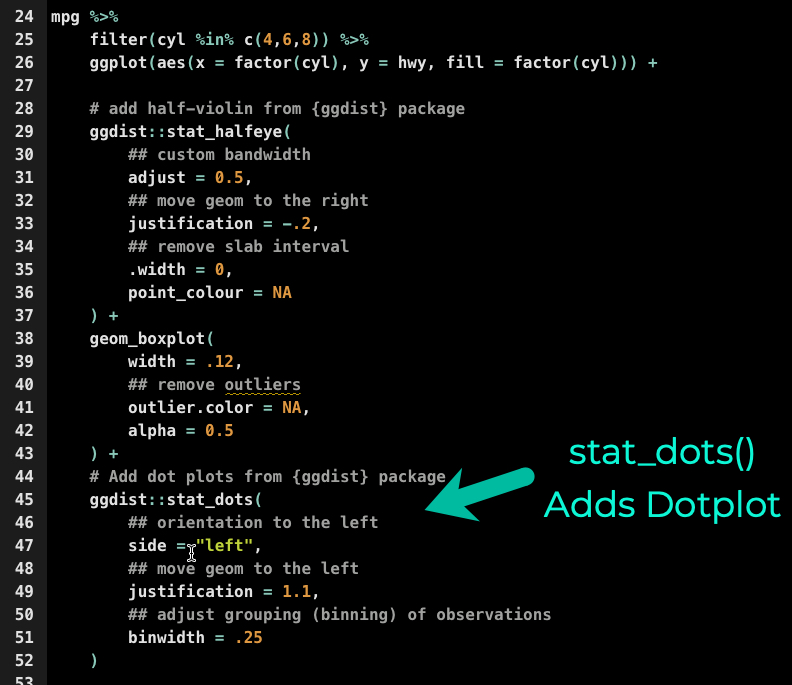 And here’s the output. We now have the three main geometries completed. 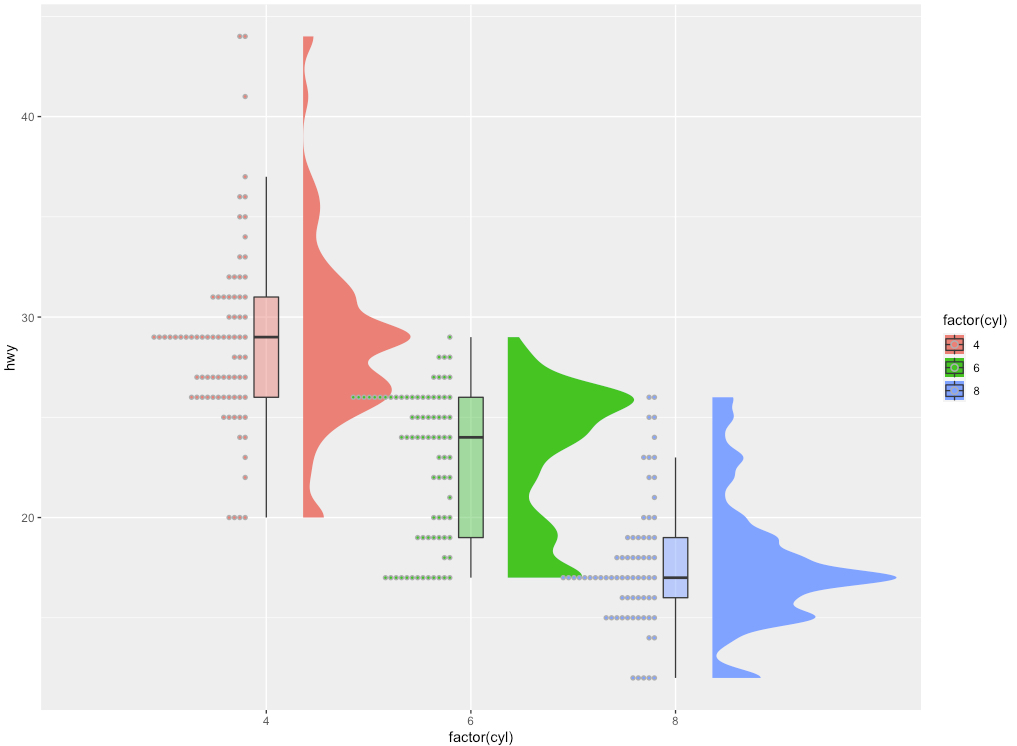 We can clean up our plot with a professional-looking theme using tidyquant::theme_tq(). We’ll also rotate it with coord_flip() to give it the raincloud appearance. 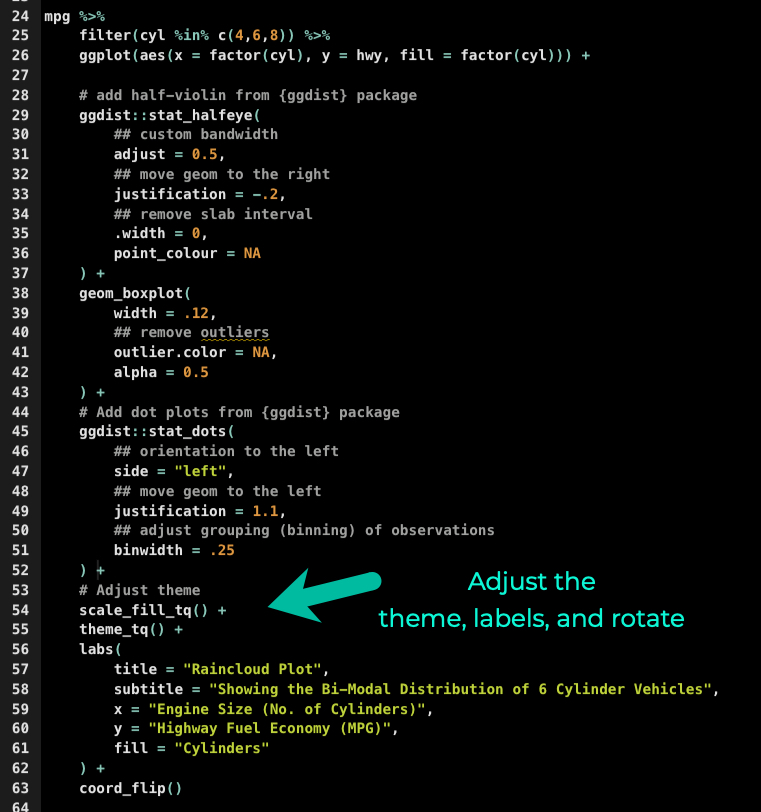 We’ve just finalized our plot. We can see clearly that the distribution of the 6-cylinder is bi-modal, something you can’t tell with an ordinary boxplot. We should investigate why there are so many dots in 6-cylinder with low highway-fuel economy. We’ll save that for another R-Tip. 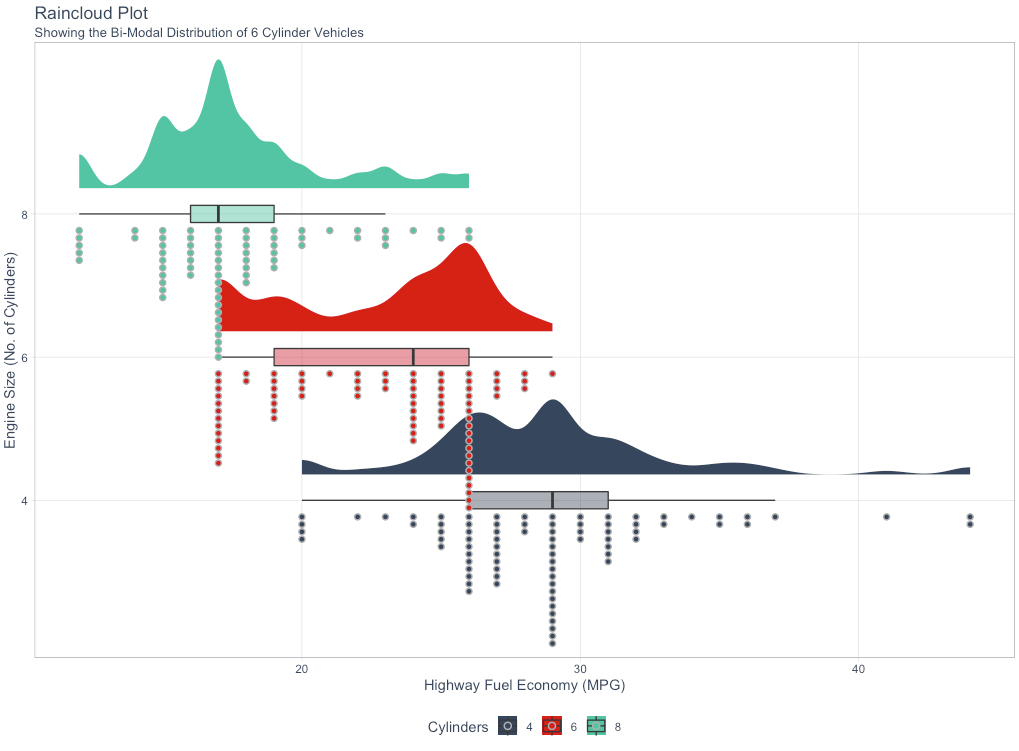 You just learned how to make Raincloud Plots with ggdist. But, there’s a lot more to visualization.

It’s critical to learn how to visualize with ggplot2, which is the premier framework for data visualization in R.

If you’d like to learn ggplot2, data visualizations, and data science for business with R, then read on. 👇

My Struggles with Learning Data Science

It took me a long time to learn how to apply data science to business. And I made a lot of mistakes as I fumbled through learning R.

I specifically had a tough time navigating the ever-increasing landscape of tools and packages, trying to pick between R and Python, and getting lost along the way.

What I found out is that:

How I can help

If you are interested in learning R and the ecosystem of tools at a deeper level, then I have a streamlined program that will get you past your struggles and improve your career in the process.

It’s my 5-Course R-Track System. It’s an integrated system containing 5 courses that work together on a learning path. Through 8 projects, you learn everything you need to help your organization: from data science foundations, to advanced machine learning, to web applications and deployment.

The result is that you break through previous struggles, learning from my experience & our community of 2653 data scientists that are ready to help you succeed.

Ready to take the next step? Then let’s get started. 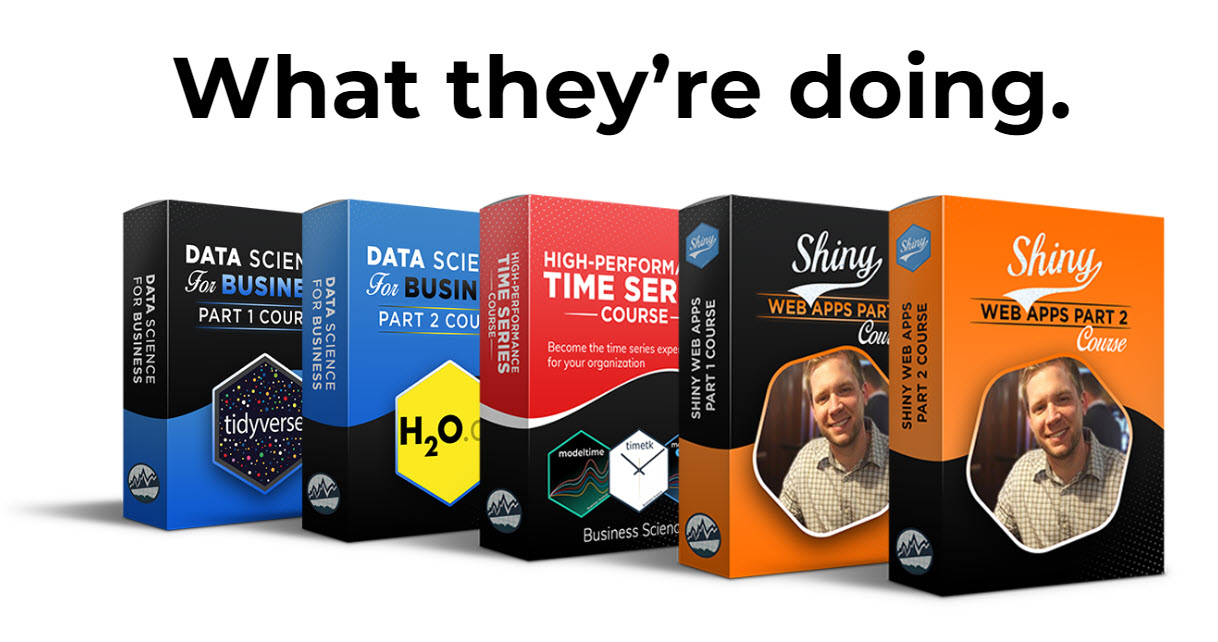