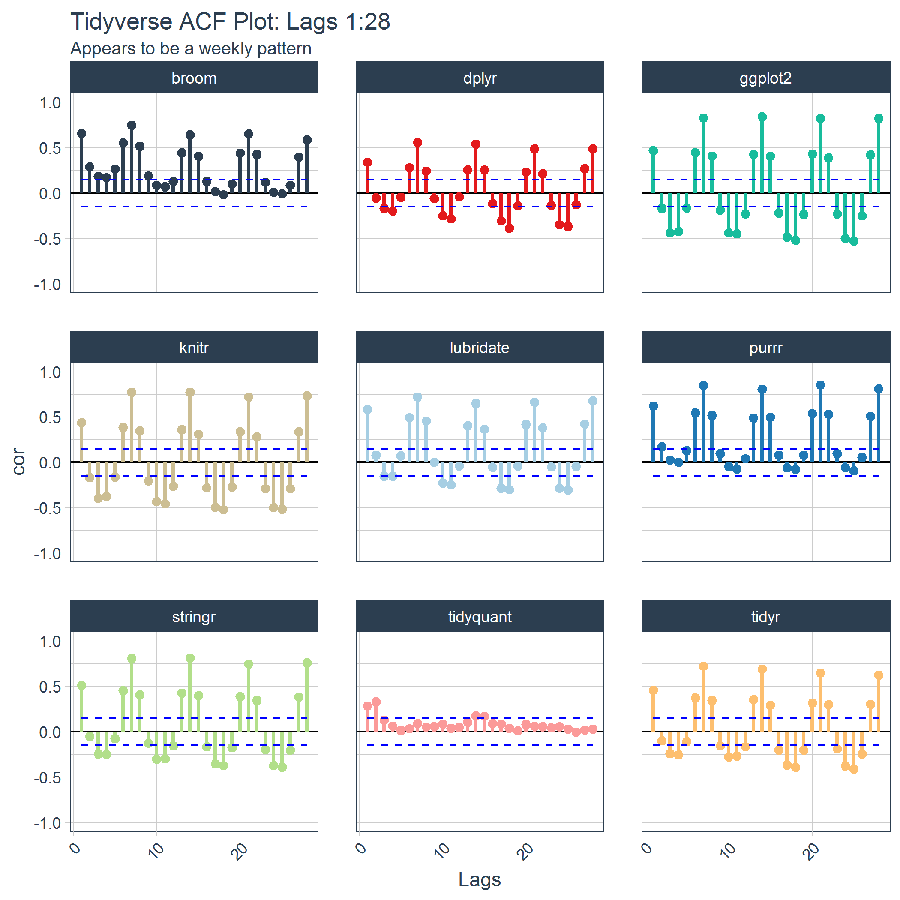 In the fourth part in a series on Tidy Time Series Analysis, we’ll investigate lags and autocorrelation, which are useful in understanding seasonality and form the basis for autoregressive forecast models such as AR, ARMA, ARIMA, SARIMA (basically any forecast model with “AR” in the acronym). We’ll use the tidyquant package along with our tidyverse downloads data obtained from cranlogs. The focus of this post is using lag.xts(), a function capable of returning multiple lags from a xts object, to investigate autocorrelation in lags among the daily tidyverse package downloads. When using lag.xts() with tq_mutate() we can scale to multiple groups (different tidyverse packages in our case). If you like what you read, please follow us on social media to stay up on the latest Business Science news, events and information! As always, we are interested in both expanding our network of data scientists and seeking new clients interested in applying data science to business and finance. If interested, contact us.

If you haven’t checked out the previous tidy time series posts, you may want to review them to get up to speed.

Here’s an example of the autocorrelation plot we investigate as part of this post:

We’ll be using the same “tidyverse” dataset as the last several posts. The script below gets the package downloads for the first half of 2017.

We can visualize daily downloads, but detecting the trend is quite difficult due to noise in the data. 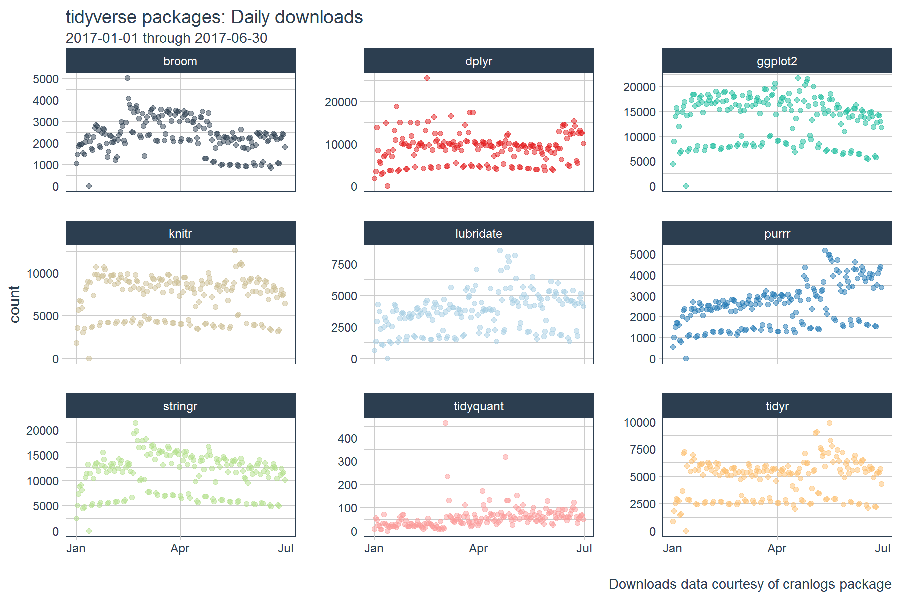 The lag operator (also known as backshift operator) is a function that shifts (offsets) a time series such that the “lagged” values are aligned with the actual time series. The lags can be shifted any number of units, which simply controls the length of the backshift. The picture below illustrates the lag operation for lags 1 and 2. 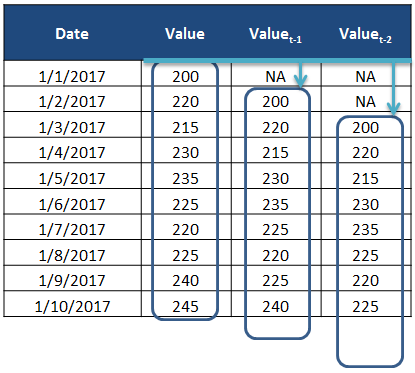 Lags are very useful in time series analysis because of a phenomenon called autocorrelation, which is a tendency for the values within a time series to be correlated with previous copies of itself. One benefit to autocorrelation is that we can identify patterns within the time series, which helps in determining seasonality, the tendency for patterns to repeat at periodic frequencies. Understanding how to calculate lags and analyze autocorrelation will be the focus of this post.

Finally, lags and autocorrelation are central to numerous forecasting models that incorporate autoregression, regressing a time series using previous values of itself. Autoregression is the basis for one of the most widely used forecasting techniques, the autoregressive integrated moving average model or ARIMA for short. Possibly the most widely used tool for forecasting, the forecast package by Rob Hyndman, implements ARIMA (and a number of other forecast modeling techniques). We’ll save autoregression and ARIMA for another day as the subject is truly fascinating and deserves its own focus.

The xts, zoo, and TTR packages have some great functions that enable working with time series. The tidyquant package enables a “tidy” implementation of these functions. You can see which functions are integrated into tidyquant package using tq_mutate_fun_options(). We use glimpse() to shorten the output.

Today, we’ll take a look at the lag.xts() function from the xts package, which is a really great function for getting multiple lags. Before we dive into an analysis, let’s see how the function works. Say we have a time series of ten values beginning in 2017.

The lag.xts() function generates a sequence of lags (t-1, t-2, t-3, …, t-k) using the argument k. However, it only works on xts objects (or other matrix, vector-based objects). In other words, it fails on our “tidy” tibble. We get an “unsupported type” error.

Now, watch what happens when converted to an xts object. We’ll use tk_xts() from the timetk package to coerce from a time-based tibble (tibble with a date or time component) to and xts object.

We get our lags! However, we still have one problem: We need our original values so we can analyze the counts against the lags. If we want to get the original values too, we can do something like this.

That’s a lot of work for a simple operation. Fortunately we have tq_mutate() to the rescue!

The tidyquant package enables a “tidy” implementation of the xts-based functions from packages such as xts, zoo, quantmod, TTR and PerformanceAnalytics. Visit the docs to learn more.

Here’s a quick example. We use the select = value to send the “value” column to the mutation function. In this case our mutate_fun = lag.xts. We supply k = 5 as an additional argument.

That’s much easier. We get the value column returned in addition to the lags, which is the benefit of using tq_mutate(). If you use tq_transmute() instead, the result would be the lags only, which is what lag.xts() returns.

Now that we understand a little more about lags and the lag.xts() and tq_mutate() functions, let’s put this information to use with a lag and autocorrelation analysis of the tidyverse package downloads. We’ll analyze all tidyverse packages together, showing off the scalability of tq_mutate().

Scaling the Lag and Autocorrelation Calculation

First, let’s get lags 1 through 28 (4 weeks of lags). The process is quite simple: we take the tidyverse_downloads data frame, which is grouped by package, and apply tq_mutate() using the lag.xts function. We can provide column names for the new columns by prefixing “lag_” to the lag numbers, k, which the sequence from 1 to 28. The output is all of the lags for each package.

Next, we need to correlate each of the lags to the “count” column. This involves a few steps that can be strung together in a dplyr pipe (%>%):

Putting it all together:

Now that we have the correlations calculated by package and lag number in a nice “tidy” format, we can visualize the autocorrelations with ggplot to check for patterns. The plot shown below is known as an ACF plot, which is simply the autocorrelations at various lags. Initial examination of the ACF plots indicate a weekly frequency. 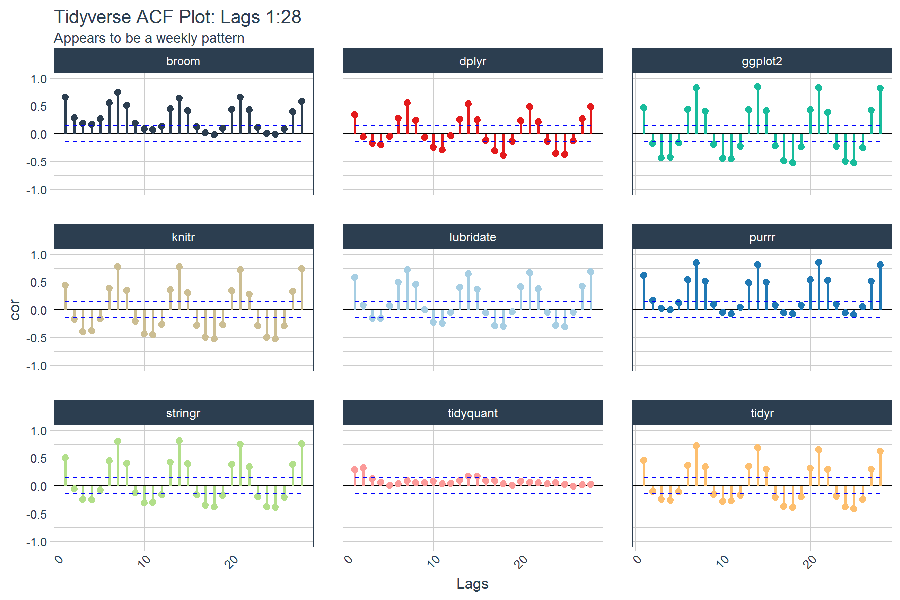 Which Lags Consistently Stand Out?

We see that there appears to be a weekly pattern, but we want to be sure. We can verify the weekly pattern assessment by reviewing the absolute value of the correlations independent of package. We take the absolute autocorrelation because we use the magnitude as a proxy for how much explanatory value the lag provides. We’ll use dplyr functions to manipulate the data for visualization:

We can now visualize the absolute correlations using a box plot that lumps each of the lags together. We can add a line to indicate the presence of outliers at values above \(1.5IQR\). If the values are consistently above this limit, the lag can be considered an outlier. Note that we use the fct_reorder() function from forcats to organize the boxplot in order of decending magnitude. 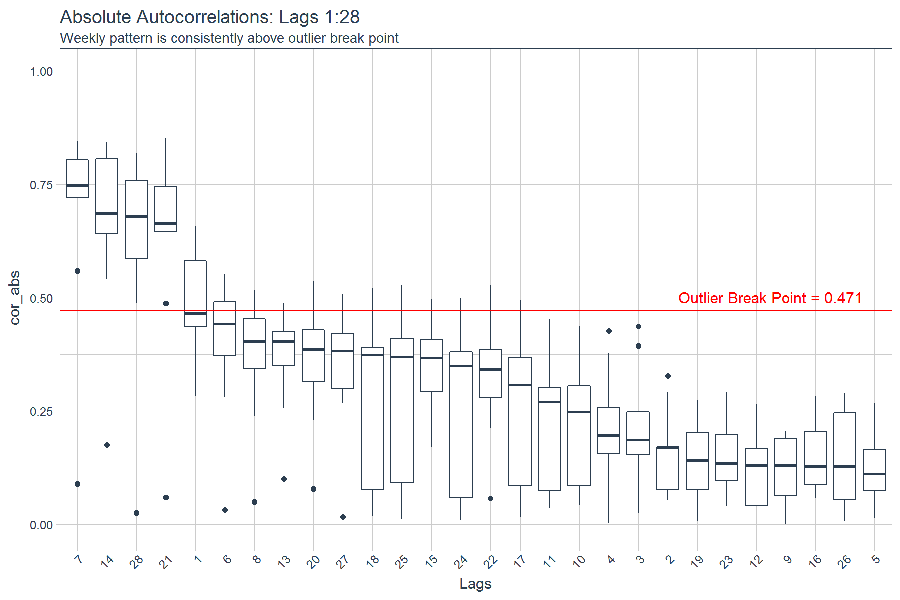 Note that the median of Lag 1 is essentially at the break point indicating that half of the packages have a presence of “abnormal” autocorrelation. However, this is not part of a seasonal pattern since a periodic frequency is not present.

Lag and autocorrelation analysis is a good way to detect seasonality. We used the autocorrelation of the lagged values to detect “abnormal” seasonal patterns. In this case, the tidyverse packages exhibit a strong weekly pattern. We saw how the tq_mutate() function was used to apply lag.xts() to the daily download counts to efficiently get lags 1 through 28. Once the lags were retrieved, we used other dplyr functions such as gather() to pivot the data and summarize() to calculate the autocorrelations. Finally, we saw the power of visual analysis of the autocorrelations. We created an ACF plot that showed a visual trend. Then we used a boxplot to detect which lags had consistent outliers. Ultimately a weekly pattern was confirmed.