We’re pleased to introduce a new package, sweep, now on CRAN! Think of it like broom for the forecast package. The forecast package is the most popular package for forecasting, and for good reason: it has a number of sophisticated forecast modeling functions. There’s one problem: forecast is based on the ts system, which makes it difficult work within the tidyverse. This is where sweep fits in! The sweep package has tidiers that convert the output from forecast modeling and forecasting functions to “tidy” data frames. We’ll go through a quick introduction to show how the tidiers can be used, and then show a fun example of forecasting GDP trends of US states. If you’re familiar with broom it will feel like second nature. If you like what you read, don’t forget to follow us on social media to stay up on the latest Business Science news, events and information!

An example of the visualization we can create using sw_sweep() for tidying a forecast:

The sweep package makes it easy to transition from the forecast package to the tidyverse. The main benefits are:

You can quickly install the packages used with the following script:

We’ll be working with Annual Gross Domestic Product (GDP) time series data for each of the US States from the FRED database.

We can get the data for one of the states by using tq_get() from the tidyquant package. The FRED code we will use is “NENGSP”, for Nebraska’s annual GDP. Set get = "economic.data" and supply a date range. By default, the returned values are named “price”. Rename “gdp”.

We’ll need the GDP data for all states to create the GDP by State forecast visualization. Here’s how to get it by scaling with tq_get().

Scaling to All 50 States

The structure of the FRED code begins with the state abbreviation, “NE” for Nebraska, followed by “NGSP”. This means we can pull the data for all states very easily by changing the first two characters.

We start by getting a data frame of state FRED codes and abbreviations. Conveniently, R ships with the state abbreviations stored in state.abb. The mutation just adds “NGSP” to the end of the abbreviation to get the FRED code. It’s really important that the code is in the first column so tq_get can scale the “getter”. The output is stored as states.

Next, we scale to pull the FRED data for all of the states by simply passing the states data frame to tq_get(). We format the output dropping the “fred_code” column, grouping on “abbreviation”, and renaming the “price” column to “gdp”. The result is stored in states_gdp.

We have two data frames now:

We’ll go through the process to show how sweep can help with tidying in the forecast workflow using the Nebraska GDP data, ne_gdp.

The forecast package works with ts objects so we’ll need to convert from a tibble (tidy data frame). Here’s how using the timekit function, tk_ts(). Supply a start date start = 2017 and frequency freq = 1 for 1 year to setup the ts object. Add silent = TRUE to skip the messages and warnings that the “date” column is being dropped (non-numeric columns are automatically dropped and the user is alerted by default).

Now we can model. Let’s use the auto.arima() function from the forecast package. This function is really cool because internally it pre-selects parameters making it easier to get forecasts especially at scale, discussed later. ;)

Once we have a model, we can using the sweep tidiers: sw_tidy(), sw_glance and sw_augment. We’ll check out sw_glance to get the model accuracy metrics.

Tidy the forecast with sw_sweep

Finally, the beauty of sweep, we can convert the forecast to a tidy data frame.

And, we can easily visualize using ggplot2. 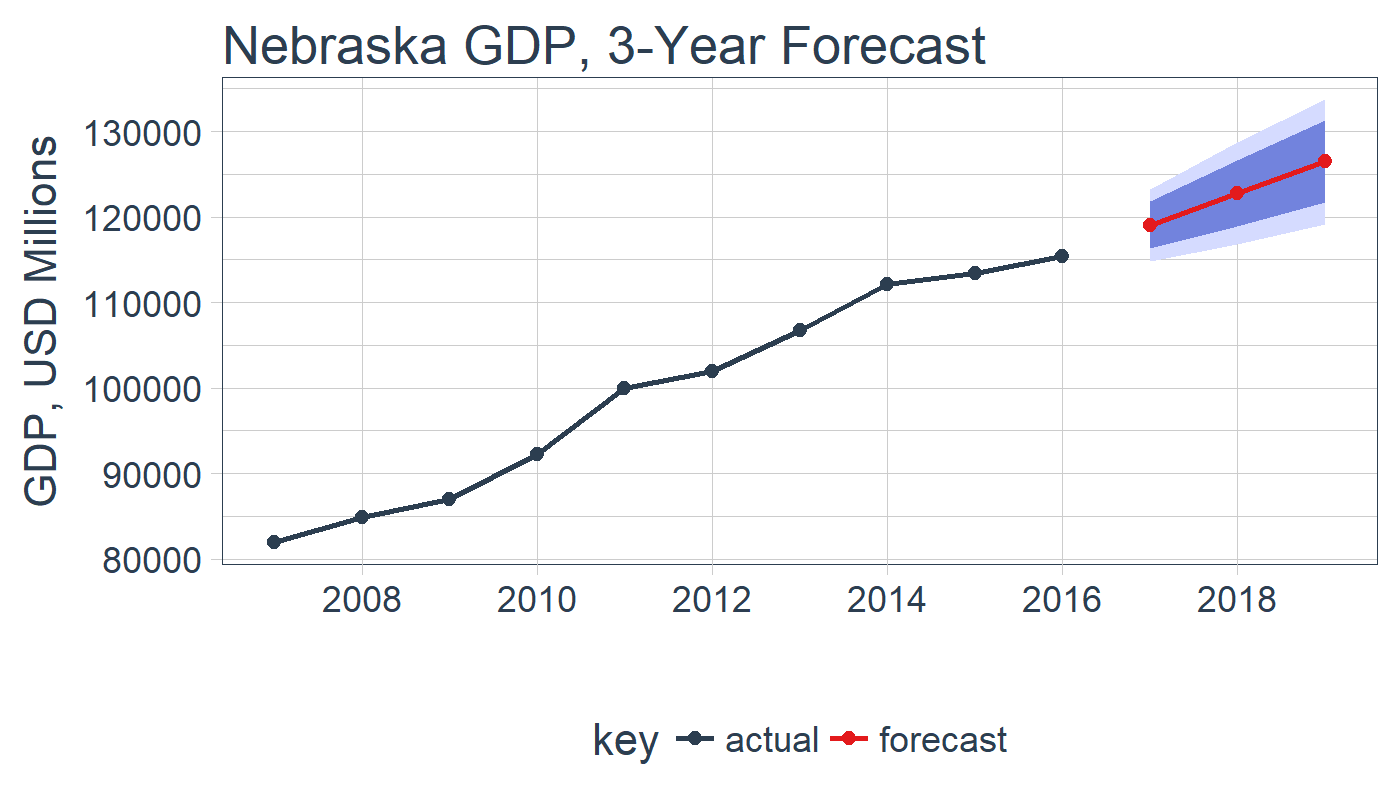 Now, onto a more sophisticated example.

Rather than one state, say we wanted to visualize the forecast of the annual GDP for all states so we can get a better understanding of trends. This is now much easier. The general steps are the same, but instead of individually managing each analysis we’ll use purrr to iterate through the 50 states keeping everything “tidy” in the process.

Start with states_gdp, which contains our data for all 50 states. Use nest() to create a nested data frame with the “date” and “gdp” inside a list column.

Third, use map() again, this time applying the auto.arima function. We can see that a new column is added called fit.

Optionally, we can run glance to get the model accuracies.

Fourth, use map() to apply the forecast function, passing h = 3 as an additional argument.

Finally, use map() to apply the sw_sweep function, passing timekit_idx = TRUE (this gets dates instead of numbers) and rename_index = "date". We no longer need the other columns so select “abbreviation” and “sweep” columns and unnest(). Viola, we have a nice tidy data frame of all of the state forecasts!

As an added bonus, we can use the facet_geo() function from the geofacet package to visualize the trend and forecast for each state. From the output it looks like most of the states are increasing, but there’s a few with more volatile trends. It might be interesting to investigate what’s causing the deviations in the midwest and south. Possibly related to the recent recession in oil and gas?

The sweep package is a great way to “tidy” the forecast package. It has several functions that tidy model output (sw_tidy, sw_glance, and sw_augment) and forecast output (sw_sweep). A big advantage is that the dates can be kept through the entire process since sweep uses timekit under the hood. If you use the forecast package and love the tidyverse, give sweep a try!

We are growing! Let us know if you are interested in joining our network of data scientist consultants. If you have expertise in Marketing Analytics, Data Science for Business, Financial Analytics, or Data Science in general, we’d love to talk. Contact us!