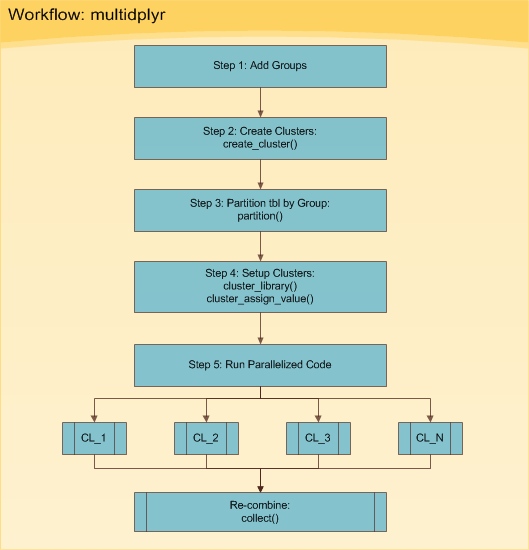 Since my initial post on parallel processing with multidplyr, there have been some recent changes in the tidy eco-system: namely the package tidyquant, which brings financial analysis to the tidyverse. The tidyquant package drastically increase the amount of tidy financial data we have access to and reduces the amount of code needed to get financial data into the tidy format. The multidplyr package adds parallel processing capability to improve the speed at which analysis can be scaled. I seriously think these two packages were made for each other. I’ll go through the same example used previously, updated with the new tidyquant functionality.

Collecting financial data in tidy format was overly difficult. Getting from xts to tibble was a pain, and there’s some amazing tidyverse functionality that cannot be used without the tibble (tidy data frame) format. That all changed with tidyquant. There’s a wide range of free data sources, and the tidyquant package makes it super simple to get financial and economic data in tidy format (more on this in a minute).

There’s one caveat to collecting data at scale: it takes time. Getting data from the internet, historical stock prices or financial statements or real-time statistics, for 500+ stocks can take anywhere from several minutes to 20+ minutes depending on the data size and number of stocks. tidyquant makes it easier to get and analyze data in the correct format, but we need a new tool to speed up the process. Enter multidplyr.

The example in this post shows off the new tq_get() function for getting stock prices at scale. However, we can get and scale much more than just stock prices. tq_get has the following data retrieval options:

The point I want to make is that ANY OF THESE GET OPTIONS CAN BE SCALED USING THE PROCESS I USE NEXT!!!

The multidplyr package is not available on CRAN, but you can install it using devtools. Also, install the development version of tidyquant which has added functionality that will be available on CRAN soon with v0.3.0.

For those following along in R, you’ll need to load the following packages:

The multidplyr workflow can be broken down into five basic steps shown in Figure 1. The five steps are implemented in Processing in Parallel.

Essentially, you start with some data set that you need to do things to multiple times. Your situation generally falls into one of two types:

The good news is both situations follow the same basic workflow. The toughest part is getting your data in the format needed to process using the workflow. Don’t worry, we’ll go through a real world example shortly so you can see how this is accomplished.

We’ll go through the multidplyr workflow using a real world example that I routinely use: collecting stock prices from the inter-web. Other uses include using modeling functions over grouped data sets, using many models on the same data set, and processing text (e.g. getting n-grams on large corpora). Basically anything with a loop.

In preparation for collecting stock prices, we need two things:

Let’s see how tidyquant makes this easy. First, getting a stock index used to be a pain:

Before tidyquant (Don’t use this):

Now with tidyquant (Use this!):

Second, getting stock prices in tidy format used to be a pain:

Before tidyquant (Don’t use this):

Now with tidyquant (Use this!):

Note that you can replace "stock.prices" with "key.ratios", "key.stats", "financials", etc to get other financial data for a stock symbol. These options can be scaled as well!

The next computation is the routine that we wish to parallelize, but first we’ll time the script running on one processor, looping in series. We are collecting ten years of historical daily stock prices for each of the 500+ stocks. This is now a simple chaining operation with tidyquant, which accepts a tibble of stocks with the symbols in the first column.

The result, sp_500_processed_in_series is a tibble (tidy data frame) with the stock prices for the 500+ stocks.

And, let’s see how long it took when processing in series. The processing time is the time elapsed in seconds. Converted to minutes this is approximately 3.71 minutes.

We just collected ten years of daily stock prices for over 500 stocks in about 3.71 minutes. Let’s parallelize the computation to get an improvement. We will follow the six steps shown in Figure 1.

Step 0: Get Number of Cores (Optional)

Prior to starting, you may want to determine how many cores your machine has. An easy way to do this is using parallel::detectCores(). This will be used to determine the number of groups to split the data into in the next set.

Let’s add groups to sp_500. The groups are needed to divide the data across your cl number cores. For me, this is 8 cores. We create a group vector, which is a sequential vector of 1:cl (1 to 8) repeated the length of the number of rows in sp_500. We then add the group vector to the sp_500 tibble using the dplyr::bind_cols() function.

Next is partitioning. Think of partitioning as sending a subset of the initial tibble to each of the clusters. The result is a partitioned data frame (party_df), which we explore next. Use the partition() function from the multidplyr package to split the sp_500 list by group and send each group to a different cluster.

The result, by_group, looks similar to our original tibble, but it is a party_df, which is very different. The key is to notice that the there are 8 Shards. Each Shard has between 63 and 64 rows, which evenly splits our data among each shard. Now that our tibble has been partitioned into a party_df, we are ready to move onto setting up the clusters.

The clusters have a local, bare-bones R work environment, which doesn’t work for the vast majority of cases. Code typically depends on libraries, functions, expressions, variables, and/or data that are not available in base R. Fortunately, there is a way to add these items to the clusters. Let’s see how.

For our computation, we are going to need to add the tidyquant library and our variables to, and from. We do this by using the cluster_library() and cluster_assign_value() functions, respectively.

We can verify that the libraries are loaded using the cluster_eval() function.

Now that we have our clusters and partitions set up and everything looks good, we can run the parallelized code. The code chunk is a little bit different than before because we need to use purrr to map tq_get() to each stock symbol:

Let’s check out the results

And, let’s see how long it took when processing in parallel.

The processing time is approximately 0.66 minutes, which is 5.6X faster! Note that it’s not a full 8X faster because of transmission time as data is sent to and from the nodes. With that said, the speed will approach 8X improvement as calculations become longer since the transmission time is fixed whereas the computation time is variable.

Parallelizing code can drastically improve speed on multi-core machines. It makes the most sense in situations involving many iterative computations. On an 8 core machine, processing time significantly improves. It will not be quite 8X faster, but the longer the computation the closer the speed gets to the full 8X improvement. For a computation that takes two minutes under normal conditions, we improved the processing speed by over 5X through parallel processing!

The focus of this post was to show how you can implement tidyquant with the multidplyr parallel-processing package for parallel processing financial applications. We worked through the five main steps in the multidplyr workflow using the new tidyquant package, which makes it much easier to get financial data in tidy format. Keep in mind that you can use any tq_get “get” option at scale.