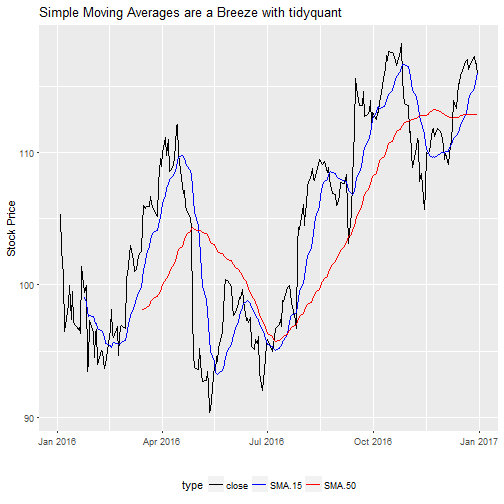 My new package, tidyquant, is now available on CRAN. tidyquant integrates the best quantitative resources for collecting and analyzing quantitative data, xts, quantmod and TTR, with the tidy data infrastructure of the tidyverse allowing for seamless interaction between each. While this post aims to introduce tidyquant to the R community, it just scratches the surface of the features and benefits. We’ll go through a simple stock visualization using ggplot2, which which shows off the integration. The package is open source, and you can view the code on the tidyquant github page.

One of the reasons why I began my journey into R programming is because it’s the best open-source option for stock analysis. With quantitative financial analysis (QFA) packages like quantmod, xts and TTR, stock data can quickly be retrieved, sliced and diced, transformed and mutated, and visualized so I can make investment decisions. It’s really a beautiful thing.

Over time, the R programming landscape has evolved. A major step forward was the tidyverse, a collection of R packages that work in harmony, are built for scale-ability, and are well documented in R for Data Science. However, a problem has surfaced: the QFA packages are not easy to use with the tidyverse. The tidyverse works with data frames while the QFA packages work with extensible time-series (xts) objects. Both are great, but they don’t easily work together.

As you can imagine, my workflow was longer than I’d like. I’d work in xts to use various functions to calculate moving averages, moving average convergence divergence (MACD), Bollinger Bands, etc, and then convert to tibbles (tidy dataframes) for mapping functions with purrr to scale to many stocks, for mutating dataframes with dplyr to add new columns, and for visualizing my analysis using ggplot2. This got very long and repetitive…

Enter tidyquant. The package started off as a collection of scripts aimed at increasing my efficiency and performance of my stock analyses:

In this evolution and in the spirit of open source, I have released the tidyquant package to the R community with the hope that others can benefit from the integration between the QFA packages (quantmod, xts, and TTR) and the tidyverse. I believe this is the right way to go, and I’m looking forward to hearing your feedback.

I’ll go through an example of visualizing the 15-day and 50-day moving averages of the stock symbol, AAPL, which is for Apple Inc. Moving averages are a popular trading tool that stock analysts use to determine buying and selling signals. According to Investopedia, the moving average is…

A widely used indicator in technical analysis that helps smooth out price action by filtering out the “noise” from random price fluctuations. A moving average (MA) is a trend-following or lagging indicator because it is based on past prices. The two basic and commonly used MAs are the simple moving average (SMA), which is the simple average of a security over a defined number of time periods, and the exponential moving average (EMA), which gives bigger weight to more recent prices. The most common applications of MAs are to identify the trend direction and to determine support and resistance levels. While MAs are useful enough on their own, they also form the basis for other indicators such as the Moving Average Convergence Divergence (MACD).

Of particular interest is the crossover, the point at which a trend begins to emerge, which can be used as a buy or sell signal.

Let’s go through an example to visualize the 15-day and 50-day moving averages for AAPL.

The tidyquant package can be downloaded from CRAN:

For those following along in R, you’ll need to load the following package:

Step 2: Use tq_get to get stock prices

We’ll start by getting the last year of stock prices. We use the tidyquant tq_get() function for all data retrieval. Set the parameter get = "stock.prices" to tell tidyquant we want the historical stock prices. We can use the from argument to pass a date as the start of the collection, which accepts character string in the form of “YYYY-MM-DD”. We can use lubridate functions today() and years() to get the date from one year ago.

We now have 251 days of stock prices as a tibble object. This is exactly the format we want for working in the tidyverse.

We need to get the 15-day and 50-day moving averages. We want to use the SMA() function from the TTR package. To use any of these functions in the tidyverse, we have a few options with pros and cons:

For this tutorial, we will use tq_mutate() to expose you to OHLC notation along with the tidyquant function workflow. We’ll also show tq_mutate_xy() so you can see the difference in arguments.

An example with SMA() from the TTR package helps solidify how it works. Reviewing the documentation for SMA, we see that the function, SMA(x, n = 10, ...), accepts x a price or volume and n a number of periods to average over. For the 15-day simple moving average, we would pass a set of prices, either “close” or “adjusted”, and n = 15 for 15 days. In OHLC notation ohlc_fun = Cl for “close” or ohlc_fun = Ad for adjusted. The mutate_fun = SMA, and we pass n = 15 as an additional argument. Shown below, we pipe (%>%) our tibble of AAPL stock prices to tq_mutate(ohlc_fun = Cl, mutate_fun = SMA, n = 15), which creates an additional column with the simple moving average of the close prices.

We need both the 15-day and the 50-day moving average, which is two steps with the pipe. I rename in between steps so the column names are more descriptive.

Not all quantmod, xts, and TTR functions work with OHLC notation. A few of these functions take two primary inputs. An example of this is the Delt function from the quantmod package. The function form is Delt(x1, x2 = NULL, k = 0, type = c("arithmetic", "log")), which has x1 and x2 arguments. In these situations you will need to use the XY variant, tq_mutate_xy(), which accepts x (required) and y (optional). For the Delt function, x = x1 and y = x2.

For the SMA() function, we don’t need the y argument, but we can use the XY variant to accomplish the same task as the OHLC variant. The operation is the same except instead of ohlc_fun = Cl we replace with x = close (the name of the column being passed to the mutation function).

Back to the example

Returning back to our need, we get the simple moving averages using one of the the code options mentioned previously.

We have our 15-day and 50-day simple moving averages. Now all we need to do is visualize using ggplot2. The format of the data will need to be tidy, which requires us to use gather() from the tidyr package to shift the close, SMA.15, and SMA.50 columns into a long form with type and price. The code and final data form is shown below.

Now, we can use ggplot2 to plot the tidy data. We use the same select and gather statements above and pipe to ggplot. I add a custom palette to match the black, blue and red colors from the Investopedia graphic. The final code chunk for the visualization is as follows: 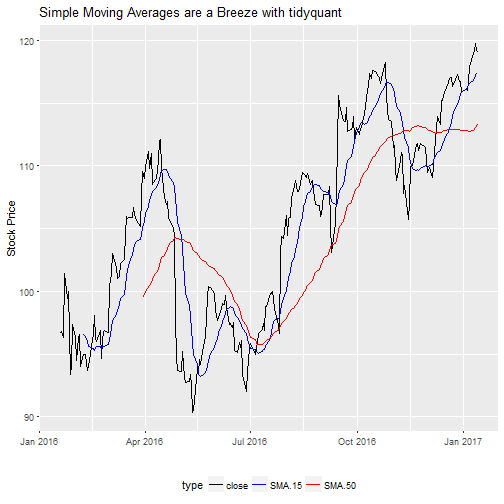 The tidyquant package integrates the three primary QFA packages, quantmod, xts, and TTR, with the tidyverse.

This example just scratches the surface of the power of tidyquant. See the vignette for a detailed discussion on each of the tidyquant features.